Delta-8 THC and synthetic cannabinoids. What are the risks?

The market of legal weed is young and still lacks regulation. The main elements in this niche market are the light cannabis, the synthetic cannabinoids and, from 2020, the delta-8 THC. Light cannabis, the one with high levels of CBD and less than 0.2% of THC, is sold without restriction, is well regulated and generally safe. The alternatives, synthetic cannabinoids and delta-8 THC, are not quite at the same level yet.

As often occurs, due to fake-news and false advertising, lot of incongruous and confusing information can be found online and it can become risky for your health , resulting in legal issues.

What is delta-8 THC. Is it safe and legal?

Delta-8 THC is a cannabinoid very similar to delta-9 THC, the active form of the cannabinoid responsible for the typical buzz of illegal cannabis. The similarity between the two cannabinoids lies in their chemical composition. Generally, delta-8 THC is less strong and its effects shorter than delta-9 THC.

All the strains of cannabis, light or not, contain traces of this cannabinoid. Delta-8 THC can be extracted from both hemp and ordinary cannabis. Its legal ambiguity is due to the fact that most of prohibitionist laws are focused on delta-9 THC and do not mention delta-8 THC. It’s actually an artifice, a legal loophole.

Usually though, if a plant contains a high percentage of delta-8 THC, it will contain high quantities of delta-9 THC as well, and it will therefore be considered illegal. It’s a different story when we talk about extractions. In fact, the most common form of delta-8 THC available on the market is that of “pure” oils and resins, that do not contain other cannabinoids. This way, some “sly” producers try to bend the law putting on the market products that actually have psychotropic effects. 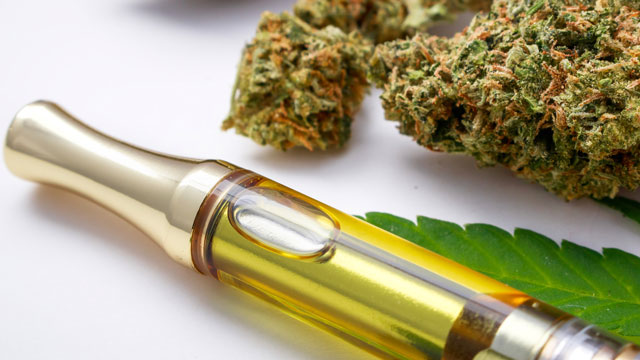 Since it’s possible to extract delta-8 THC from the hemp too, without any specific regulations, often the products on the market come from plantations of low cost industrial hemp . In most cases, analyzing samples of oils or vape cartridges with delta-8 THC from the US, the researchers have foundthe presence of heavy metals like chromium, lead and cadmium. These metals have devastating effects when they enter the body. They can cause heavy intoxication, cancer and in extreme cases deep psychosis and death.

Unfortunately it is not always easy to get the exact origin of the extractions containing delta-8 THC. Moreover, since it’s mostly the case of homemade or improvised illegal extractions, the researchers have found clear traces of solvents like dichloromethane, acetone, methanol and isopropanol.

Is delta-8 THC legal in Italy?

It depends. If the flowers or the products containing delta-8 THC don’t exceed the 0.2% of delta-9 THC, then they can be considered legal (for now). However, since it’s less strong than delta-9 THC,delta-8 must be present in high percentage to affect the body. We’re talking about a quantity above 5%.

In addition, the law can be updated at any stages, virtually outlawing the concentration of the cannabinoid delta-8 THC.

For now, in the case of light cannabis, you can safely buy flowers, oils and resins that already naturally contain minimum quantities of delta-8 THC.

With regards to the cartridges containing this cannabinoid, we recommend further consideration… For the most part these preparations are based on Vitamin E acetate that when inhaled can be toxic and lead to a severe inflammation of lungs and bronchus. The alternative is the PEG, Polyethylene glycol, a polymer, often used as a surfactant in soaps, detergents and medications. Even though it’s considered usually safe, the PEG it’s absolutely not intended for vaping or inhaling. The effects of this substance when inhaled are still unclear, therefore we recommend that you pay particular caution while using it.

What are the effect of delta-8 THC? 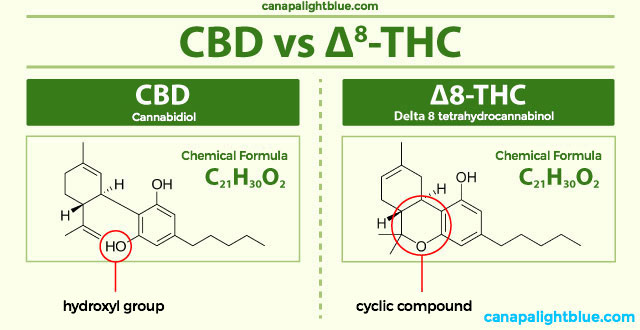 CBD and (delta-8) THC have the same chemical composition but the molecule is slightly different. But this difference is responsible for the psychotropic effects of THC.

The effects of this cannabinoid are very similar to those of delta-9 THC. But as we mentioned, the effects are way less powerful. Therefore, delta-8 THC gets you high, but less than delta-9 THC.

If you’re a regular consumer of CBD, be careful since the effects of delta-8 THC are nothing like those of CBD. In some cases, for consumers of CBD, non used to THC,delta-8 may induce anxiety, paranoia, nausea and other side effects typical of an intoxication. And this without any of the benefits of CBD.

People used to consuming THC instead, won’t incur in any particular side effects since delta-8 THC is way less powerful than delta-9. Probably, a constant user of THC won’t notice any different effects. Just a minor buzz.

Synthetic cannabinoids: what are they?

Synthetic cannabinoids are lab-grown substances that mimic the effects of natural cannabinoids. Despite being studied for medical and therapeutic purposes at first, most of them have no actual application yet and they’re still in the preliminary research phase. If taken the wrong way, without medical supervision, in high quantities, some of these substances could prove toxic for the human body with effects that can lead to deep psychosis or major biochemical dysfunctions. 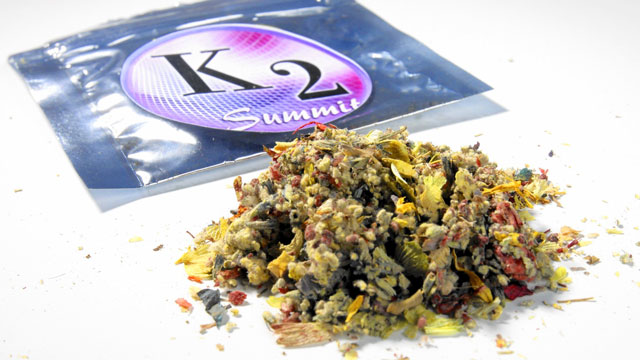 In most cases these substances are considered illegal or subject to control. They’re in fact compounds created with the sole purpose of interfering with the normal brain activity, in order to produce a sedating, intoxicating and exhilarating effect. As soon as they appear on the “black” market, they’re outlawed. Unfortunately these “designer drugs” created in labs, get easily replaced as soon as they get outlawed.

This is a list of the best known synthetic cannabinoids, also used for the production of meds like the famous “K2/Spice”, the fake cannabis responsible for hospitalizations, psychosis and deaths.

If you’re going to buy a product containing one of these substances without consulting your doctor first, we strongly advise you against it.

Synthetic cannabinoids: are they safe?

There are no long-term studies on these substances, yet. The organized crime and the illegal labs that create these substances always find new ways of escaping the law. As a result most of these substances are potentially toxic in the shorter term with unknown effects on the long term! Moreover, in most non-pharmaceutical products that mimic cannabis, these compounds non derived from cannabis are sold sprayed on weed, flowers and resins, with the addition of synthetic terpenes to emulate the natural aroma. The result is a questionable cocktail, with unpredictable effects, probably deleterious.

As per many other things, the “newest things” must always be taken with a grain of salt. In the case of delta-8 THC a key element is the origin of the products and the extractions or the fact that could be soon classified illegal like the more common delta-9 THC. In case of synthetic cannabinoids, since they’re artificial, it’s important to exercise extreme caution. The use that is not intended for medical research or hospital treatments can cause adverse and devastating effects that can even be fatal.

The information here indicated are not medical advices and may not be accurate. The contents here given have the sole purpose of outilining the data, but do not promote the use lof illegal substances and do not replace the medical opinion of your doctor. Alle the brands and products mentioned in the article are trademarks of their respective owners.

← Legalization of cannabis in Italy. Analysis and brief history HHC all you need to know on this "new" cannabinoid →