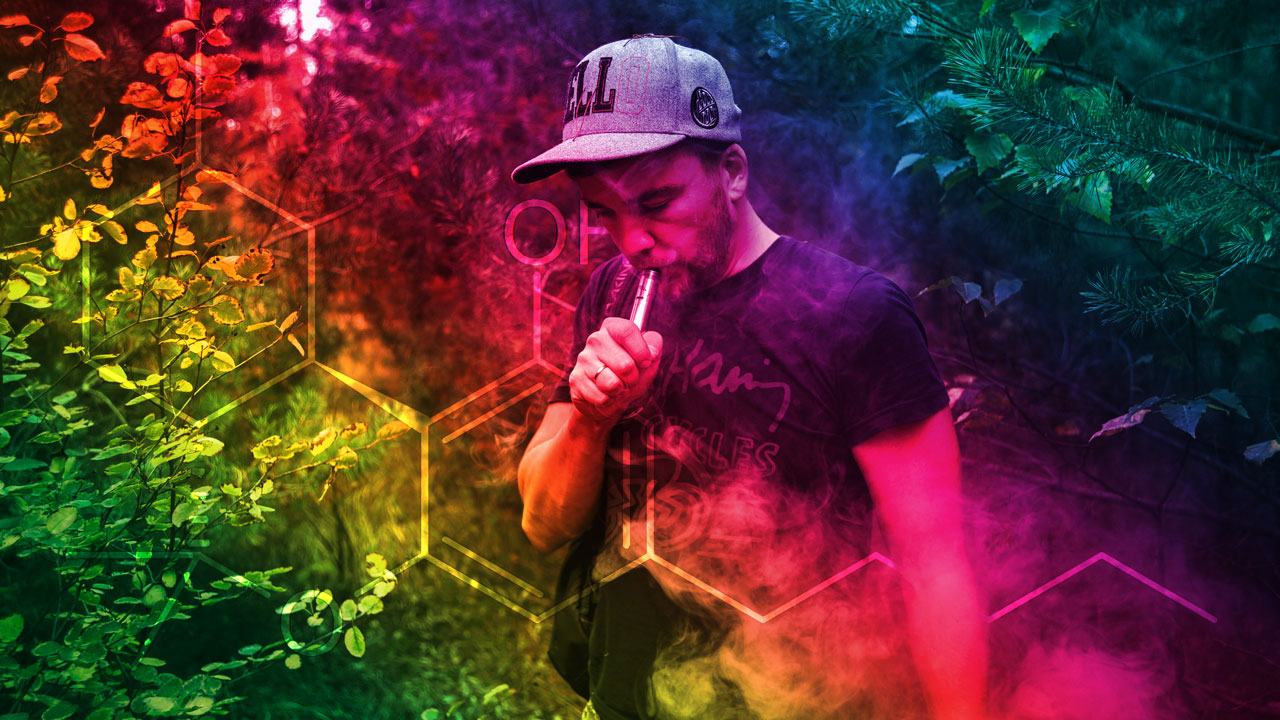 HHC all you need to know on this “new” cannabinoid

After talking about CBD, delta-8 THC and synthetic cannabinoids, let’s keep discovering the active substances present in Cannabis. This time let’s consider the the latest “news”on the market of Light Cannabis. Soon you’ll hear about the growing popularity of this cannabinoid, so we thought we would do some research to answer the FAQs, satisfy your curiosity and kick off your personal research.

No, you did not misread, it’s not a typo for THC. The Hexa-hydro-cannabinol, in short HHC, is a hydrogenated phytocannabinoid. It is naturally present in Cannabis Sativa, but in negligible amounts. That is why the market required the artificial production of this trace component, through the hydrogenation of THC or CBD. The hydrogenation is a chemical reaction that adds hydrogen to a compound. For instance, it’s used to transform vegetable oil in margarine.

The Hexa-hydro-cannabinol was first synthesized in 1947 by the chemist Roger Adams. It can be derived from CBD, delta-8 THC and delta-9 THC. Nowadays, most of the HHC on the market, both as pure extract or vape cartridges, derives from CBD of Cannabis Sativa (light Cannabis). 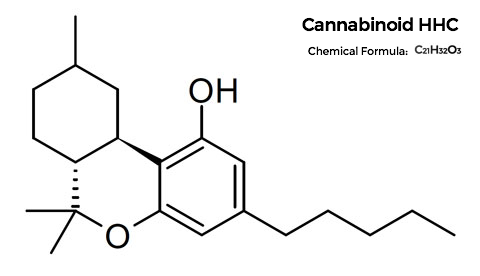 Structure and chemical formula of the cannabinoid HHC – source: Wikipedia

What are the effects and power of HHC?

The Hexa-hydro-cannabinol can connect with the receptors CB1 of the human endocannabinoid system but also with that of some particular animals. This means that it affects the human body just like CBD or THC. In particular, HHC seems to work like THC, but to a lesser extent. In fact, HHC is even less effective than delta-8 THC that is considered having half the power of delta-9 THC. 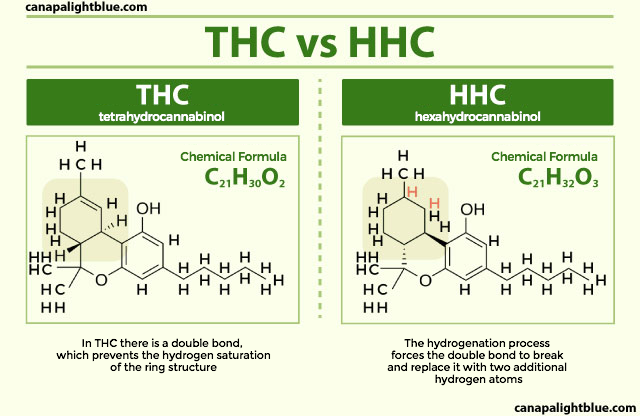 Two sides of the same coin

The low intensity of HHC is due to the fact that this cannabinoid is often present in two mirror molecular forms, called enantiomers. One of these molecules, the 9R HHC is active on human receptors CB1, while the other, the 9S HHC, is way less active.

What is the real power of HHC?

Usually, the labs create extractions of HHC with a minimum ratio of 50% between the two enantiomers. Always trying ot enhance the quantity of the active form 9R HHC. The latest extractions techniques are not able to fully separate the two molecules off HHC in an efficient and cost-effective way, yet. And, quite often, in the “purest” extracts, the ratio between the two molecules is 2:1 (9R HHC / 9S HHC).

The consumers refer of a medium powerful buzz, with enhanced cognitive abilities, improved focus, more physical strenght and a relaxing, analgesic effect, especially for the muscles.

Does HHC show in drug tests?

That’s the million-dollar question! First of all, let’s remember that HHC has psychotropic effects, therefore it is likely to become subject to legal control (in some countries it already is). Moreover, it is a “new arrival” on the market, so there are not enough studies and researches on its effects or interactions with the human body.

That being said, considering that HHC does not convert to 11-hydroxy-THC, that is the metabolite of THC which the drug tests are based on, we can assume that HHC can’t probably be detected (for now). This is referred to the 11-hydroxy-THC based tests.

Obviously, since there’s no study or research yet on the matter, we advise against risking you job or career based on insufficient information.

What are the health risks with HHC?

As per most of the cannabinoids derived from Cannabis, there are not enough proof, research or studies yet. Therefore it’s not possible to predict the short or long term effects associated with HHC. Besides, since it’s not a regulated molecule for human use, it relieves producers of the statutory obligation to test their products for contamination. Then if you want to try HHC we recommend extreme caution in choosing an earnest producer, possibly a company specialized in cannabonoids extracts.

Since HHC is a trace component in Cannabis plants and seeds, humans have been consuming it in very small quantitites for thousands of years. Unfortunately though, we got to know its “pure” form only recently. The effects of HHC on your body, with no other cannabinoids and in high quantities, are still unknown. 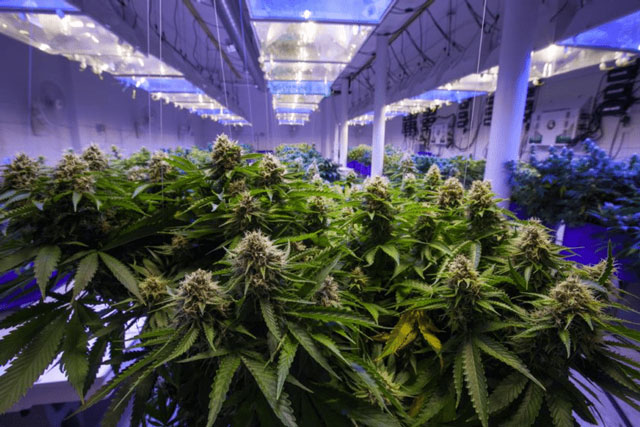 Another big question. In this moment, because of a legal vacuum, just like for delta-8 THC, the legal experts are divided. Some experts declare that it being naturally present in hemp plants and seeds, it is perfectly legal. This thesis has become popular thanks to a recent article published in Los Angeles Weekly. Other legal experts remain skeptical. James Stephens, american scientist expert in cannabinoids, is convinced that it can be considered a homolog of THC. Therefore, it could be classified as a controlled substance (and made illegal) as it happened to other synthetic cannabinoids like Spice and K2.

Nowadays, HHC is on the market, in the same grey area that goes from light Cannabis CBD to the latest delta-8 THC. As for now the consumers interested in this item will have to take on all the responsibility of the research and legal risks, on a personal level.

It should be pointed out that, despite hoping that Cannabis and its derivatives get soon liberlized and regulated, we can’t and won’t promote its consume. This article is intended as a brief collection of some answers to the most common FAQs, so that you can have a starting point to your own research.

As always, remember that when it comes to your physical and mental health, nothing can replace the advice of your doctor. Nowadays many doctors promote Cannabis and its derivatives. If you’re interested in this matter, we recommend consulting with one of the pro-cannabis doctors in Italy.

← Delta-8 THC and synthetic cannabinoids. What are the risks? Cannabichromene (CBC): let's find out the benefits of this cannabinoid →